here's what is going to change

As we've promised Kiwi TCMS is starting work on improving the legacy reports functionality. After analyzing your feedback in Issue #657 here's what we came up with. Note: screenshots below are mockups.

Inside Kiwi TCMS the term "test case" is used to refer to specific scenario of testing steps. A "test run" is the collection of multiple "test cases" which will be executed against a particular product build and environment.

The specific results are kept into what is now called "test case run". This will be renamed to "test execution" (internally TestExecution class) to make it more clear and easier to distinguish among other artifacts.

As a webUI user I want to easily distinguish between PASSED, FAILED and other statuses when looking at charts and graphical visualizations.

This feature request comes from the TestRun progress bar. Other charts should use the same 4 status categories and color coding standards:

Here the percent value will continue to mean percent completed, aka non-IDLE.

Implementation wise the TestCaseRunStatus class defines methods for the actual icons to be used. The same can be done for colors and this can be used directly in the HTML templates. For color definitions see Status Palette.

As a tester I want to have a nice looking TestRun execution report which I can present to my managers, stakeholders and/or customers. The page needs to be printer friendly for “Print to PDF” or print on paper!

Kiwi TCMS already has this feature. Clicking the [Report] button in the progress widget at TR-625 presents TestRun execution information in a simplified format found at TR-625/Report. In order to improve the current implementation:

As a manager I want to know what the work-load/performance of individual teams and engineers is. I can use this information either for performance review or for capacity planning of future work. 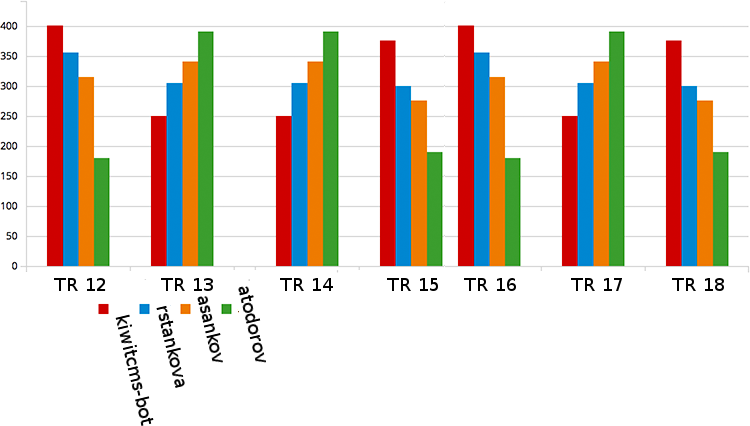 A new page will be available under TELEMETRY -> Management -> Performance which will:

The backend will query TestExecution.objects and apply the selected filters and grouping logic! The returned data is the count of how many tests this person/team was able to execute.

Further refinement: Aggregate count by statuses (executed vs. non-executed or PASSED vs. FAILED vs. OTHER). May be represented as a stacked bar chart if grouping of series is supported.

As a manager I want to know how much time it took to complete previous testing activities. I can use this information for predicting future capacity.

Visually this will be a line chart with one line for each user/group which have been selected. It will be very good if the existing chart libraries allow for a stacked line chart or a stacked area chart here!

As a test lead I want to know approximately when testing is expected to complete.

This feature will utilize time-tracking data from previous executions and display the approximated calculation in the web UI. The most obvious place for this is the TestRun progress widget (under the progress bar) or the Test Run page (near the Started at/Finished at fields).

Unknown: where does baseline duration come from? Either from the most recent TestRun or an average from all of the previous Test Runs. Note that cumulative TestRun duration is calculated between Start/Finish events while individual TestExecution records may sum up to a different value! This needs to be clarified.

As a tester and/or manager I want to be able to discover which TestCase(s) are the most common source of problems, that is they fail all the time or from time to time. This may indicate poor test design or bad practices when developing the product. This is also known as test stability or flaky tests! 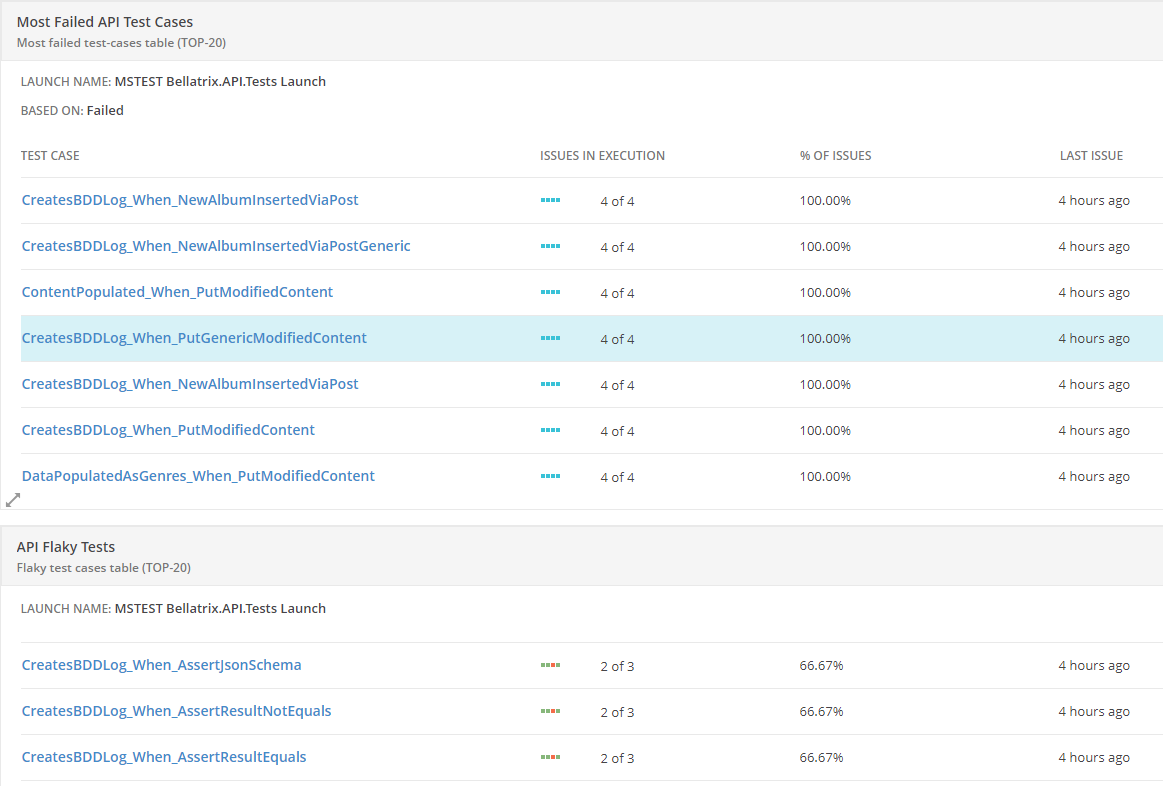 As a tester and/or manager I want to see a breakdown of tests so that I have an idea how the existing tests for the product are distributed! 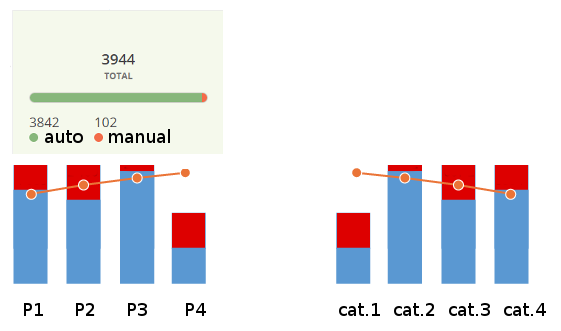 As a test engineer I want to be able to quickly see health information about individual test case. This can help me visually locate TCs that need improvement so I can edit them or will help me visually judge the past history of the TC I am looking at.

This depends on the previous feature. Possible places where health status can be shown:

As a test manager I want to see information if Product builds are getting better or worse. In other words what is the trend in TestExecution number and status! 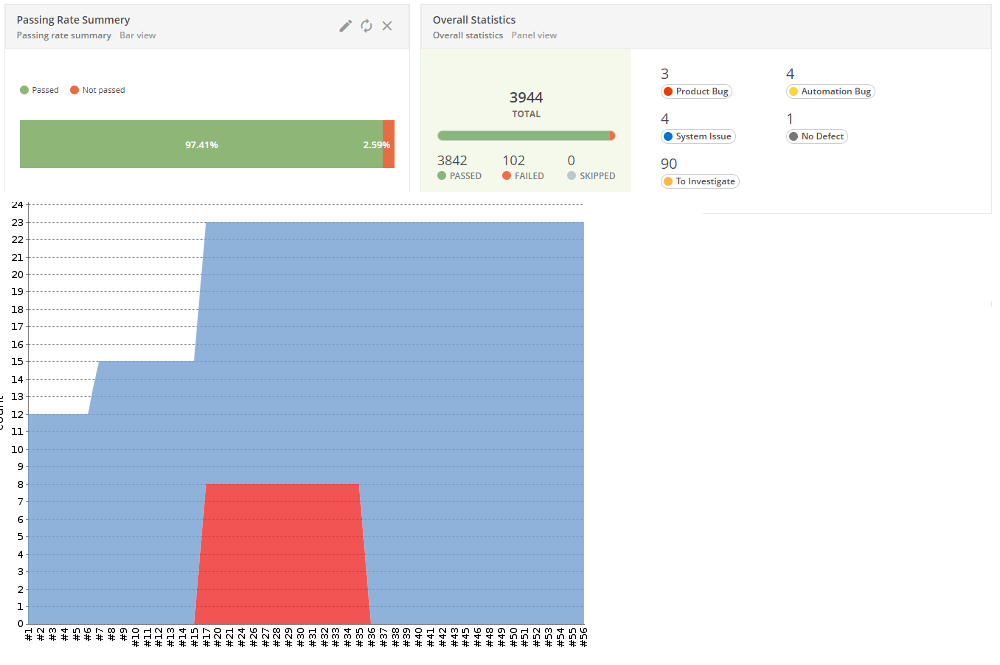 You will be able to select TestRuns and/or weeks for detailed comparison.

As a test manager I want to see detailed information about testing status for specific test run(s) or a calendar period. I also want to be able to compare the results between various weeks and/or test runs.

This is a continuation of Execution trends telemetry but can be used on its own as well. It will be accessible from TELEMETRY -> Testing -> Status matrix

Filtering options are the same. Results are displayed in a table format where columns are the filtered (or previously selected) TestRun objects or calendar weeks. The rows are the names of individual test cases that have been executed. If a case is missing the cell will be empty.

Links to bugs will be shown in each cell with a summarized bug table below the charts.

This is complimentary to the TestRun status matrix feature! While searching for TestRuns in SEARCH -> Test Runs the user will be able to select several rows and proceed to compare them as described above.