Posted by Alexander Todorov on Fri 17 January 2020 under community , roadmap

Hello testers, the Kiwi TCMS team sat down together last week and talked about what we feel is important for us during the upcoming year. This blog post outlines our roadmap for 2020! 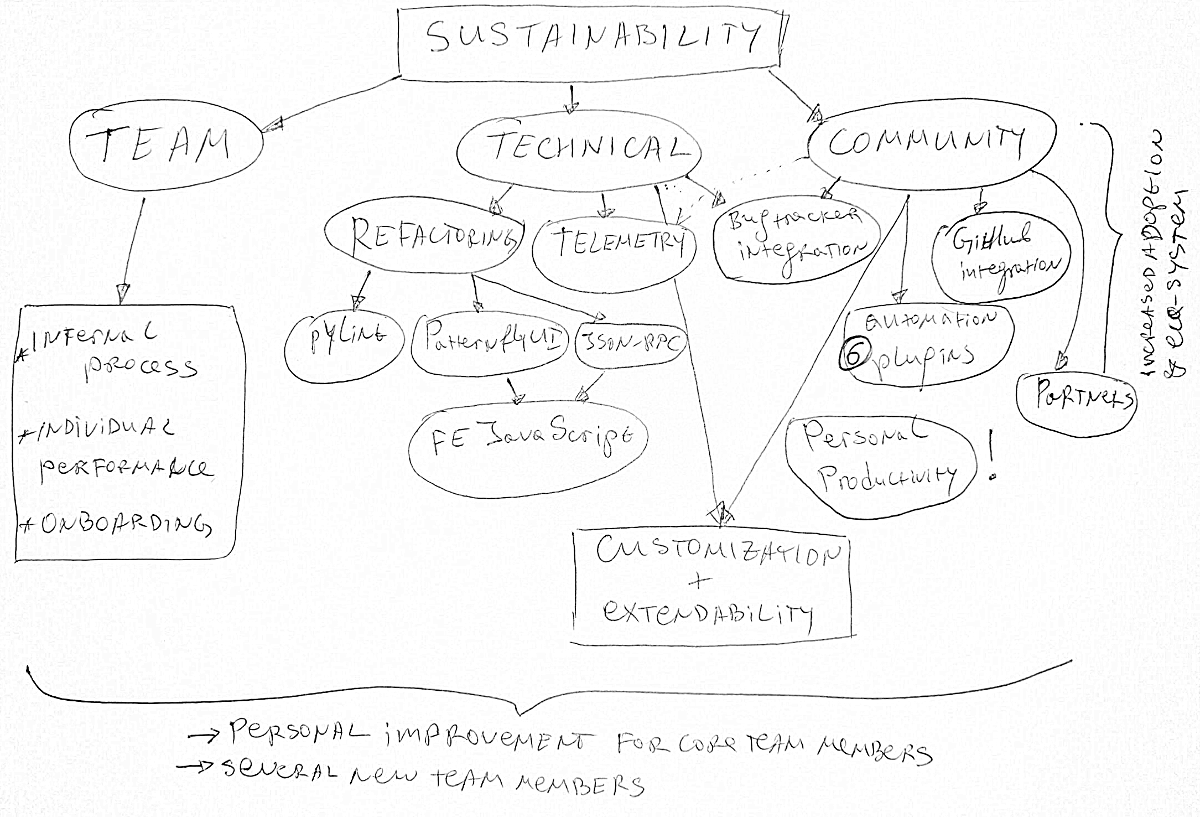 The big goal towards which we are striving is to turn Kiwi TCMS into a sustainable open source project. For now this means several key areas:

Right now we have a core team with 6 newcomers on-boarding. Engineering performance is all over the place with some people contributing too much while others contributing too little. More importantly there is no consistent pace of contributions which makes planning timely completion of technical tasks impossible.

At the moment we do operate as a bunch of disconnected people who happen to talk to each other from time to time.

We are going to adjust our internal processes and how we on-board new members. In fact we did our first "scrum-like" meeting this week and agreed to change our existing practice and strive to become better as a team!

Goal: to have a cohesive team at the end of the year which operates with a predictable capacity.

The areas shown on the picture above will receive more priority.

Goal: where FE sends AJAX requests to BE views replace with JSON RPC API instead.

Extra: start tackling the JavaScript mess that we have. This depends and is related to Patternfly migration and overall refactoring.

Extra: make it easier for downstream installations to extend and override parts of Kiwi TCMS in order for users to adjust the system to their own needs. The system is pretty flexible as-is but there have been requests, both online and offline, to provide some extra features! We'll start looking into them, likely making partial progress in the next 12 months.

Last year Kiwi TCMS had massive success at every single conference that we've been to. Both project and team have been well received. While we are going to continue being part of various communities around the world we are trying to limit extensive travel and focus on functionality and partnerships which will increase Kiwi TCMS eco-system, make the project even more popular and drive further adoption!

Ongoing: work with our partners from the proprietary and open source worlds. This is hard to quantify and lots of it doesn't actually depend on the team. However we are continuing to talk to them regularly. Expect new feedback to become available under GitHub Issues.

Extra: see what we can do about testing productivity! This has always been part of our mission but we have not been able to produce anything worth sharing. We do have ideas in this space but we are generally looking for partnerships and collaborations. It is very likely that there will not be very much progress on this front because it is hard to define it properly :-(.

At the end of the day most of these goals compliment each other and help drive all of them to completion. Many of the still on-boarding people have expressed desire to improve their Python & Django skills. Working to resolve issues in the above specific areas will give them this opportunity! I expect they will show good progress on their respective tasks so we can write more about them on this blog.